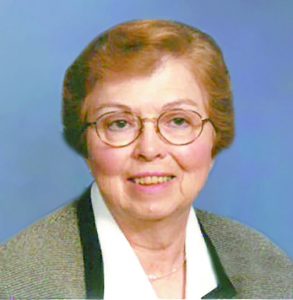 Geraldine L. Swanson, 84, Hallock, Minn., passed away peacefully at home early Wednesday morning, Nov. 4, 2020.
She was born in Karlstad, the sixth of 14 children, to Norris and Margaret Lund on Jan. 16, 1936. She spent most of her youth in Karlstad graduating at Karlstad High School in 1954. Geraldine had a sensitive, selfless, caring nature. This surfaced as she graduated from high school. Her father was working away from home and her mother was very ill and unable to care for her family. After graduation, Geraldine stayed at home to care for her mother and help with the care of her younger siblings. Her mother passed away the following year and Geraldine continued to stay at home, which served as a good role model for her younger brothers and sisters.
On Sept. 1, 1956, Geraldine was united in marriage to Myron Swanson at First Lutheran Church in Karlstad. Thereafter, they made their home in Hallock and raised their two children, a son, Mitchell, and daughter, Jill. Geraldine was a member of Grace Lutheran Church and worked for HE Everson for many years.
On Nov. 14, 1968, Geraldine had a kidney transplant, which blessed her with many more years of life. She cherished those years as a gift and embraced that time with many passions in her life, which included raising her two young children, spending time at their cabin with her children and Myron, and many other family and friends. She enjoyed the outdoors with all wildlife at the cabin and also took up cross country skiing.
Geraldine had a talent for color and design, which translated into many beautiful items for the home. But it was the beautiful quilts she produced, of which many were given away as gifts that are so cherished. Being proud of her Norwegian heritage, she celebrated the holidays by making lefse, flatbread and krumkaka, and shared this talent with many of her friends.
Geraldine is survived by her daughter, Jill; grandsons, Nicholas (Jolene) Swanson, Kyle (Dana) Swanson; daughter-in-law, Jodie (Neil) Zatorski; grandchildren, Austin (Katie) Cosley, Tyler (Macy) Cosley, Tucker (Gabby) Cosley; great-grandchildren, Harper, Drew, Evan and Reed Swanson, and Baron Cosley; sisters, Phyllis Borg, Patsy (John) Erickson, Joy Montague, Sandra (Joe) Nuccetelli, Karen (Dick) Lyngholm; brothers, Donald Lund, John (Denise) Lund, Barry Lund; and sister-in-law, Peggy Fencken; plus many more nieces and nephews.
She was preceded in death by her parents; husband, Myron; son, Mitchell; son-in-law, Bradley Cosley; sisters and brothers-in-law, Norma and Al Devore, Gloria and Dr. Jack Grabow, and Anita and Gene Milam; brothers, Russell Lund and Dennis Lund; brother-in-law, Harold Borg; brothers-in-law and sisters-in-law, Lavonne and Pete Dziengel, Lee and Lu Swanson.
Funeral services will be scheduled at a later date.  Interment will be in Greenwood Cemetery, Hallock.
Austin Funeral Chapel, Hallock, is in charge of the arrangements. www.austinfuneralchapel.com