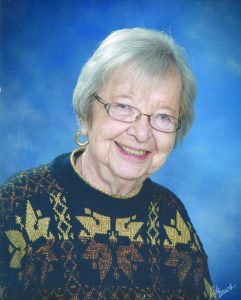 Elaine Olson, 91, of Stephen, Minn., passed away at Kittson Memorial Healthcare Center on Tuesday, Nov. 24, 2020.
Lois Elaine Hogberg was born at Warren, Minn., on April 7, 1929, the daughter of Robert and Frieda Hogberg. She was baptized and confirmed in the Lutheran faith.
Elaine grew up on the family farm east of Argyle, Minn., and graduated from Argyle High School. She went on to attend Moorhead State College and received her degree in elementary education.
In 1949, Elaine married Raymond Olson at Argyle. Elaine taught fifth and sixth grade in the Stephen School District for 26 years.
She was a member of First Lutheran Church. Elaine enjoyed bowling, playing bridge and was a member of the Red Hat Society. Raymond passed away in 2004.
Elaine is survived by: two sons, Terry Olson, Thief River Falls, Minn., and Andrew (JoyBeth) Olson, Hallock, Minn.; grandchildren, Shanda, Tom, Aaron, Andee and Addison; six great-grandchildren; and a sister, Beverly (Marlo) Orth, Eau Claire, Wis.; as well as niceces and nephews.
She was preceded in death by her parents; husband; and sister, Merece Gentz.
Family and close friends celebrated Elaine’s life on Sunday, Nov., 29, 2020, at 2 p.m. in First Lutheran Church, Stephen.  Interment will be in the Stephen City Cemetery. Visitation was held at the church for one hour prior to the service. Rev. Michael Schendel, presided; Renee Jensen, organist. Honorary pall bearers were all those in attendance.
Austin Funeral Chapel, Stephen, was in charge of arrangements. www.austin-funeralchapel.com.