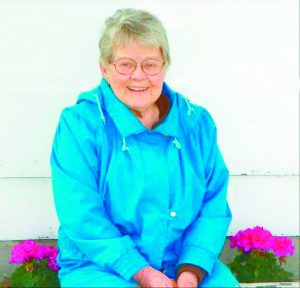 Harriet Docken, 92, of Hallock, Minn., passed away on Saturday, Dec. 12, 2020, at the Kittson Memorial Healthcare Center Nursing Home.
Harriet Eileen Carlson was born on Sept. 8, 1928, in St Paul, Minn. She was raised by her Great-Uncle and Aunt Ole and Betsy Carlson. Harriet lived four miles west of Hallock until age 7, when the family moved into Hallock where she lived until she went off to college. The neighbor lady across the street taught Harriet how to play the piano and the future would be bright with music in it. During her school years, Harriet would play piano in a band for dances and the best music ever was the “Big Band” era.
After graduating from high school, Harriet went to Gustavus Adolphus and Moorhead for teaching. She taught in Roseau, St. Vincent, Kennedy and Humboldt until the school closed, at which time Harriet retired.
Harriet married Lawrence “Curly” Docken on July 8, 1950, in Hallock. They made their home in Northcote, Minn., and had two children, Lori Jane and Thomas Andrew.
Red River Lutheran Church needed an organist so Harriet took the job. For 55 years she played the piano and organ as well as leading the choir, enjoying every minute of it.
Harriet always said she was not a good cook except for buns and beans. Even so, family and friends always had a full belly when they left her house. If you came at coffee time there were usually orange rolls in the freezer.
The outdoors was the place to be for Harriet. In the summer, keeping the yard and woods tidy was the thing to do. Winter rolled around and cross country skiing as well as skating on the coulee were each a favorite.
Going to Sweden was a big highlight for Harriet. She took her heritage seriously. When you came into her cute white cottage home with the blue shutters you knew there was a Swede in the house. Knick knacks of the home country were all around for all to see.
Harriet had a love for animals, especially dogs.  Her favorite was the collie and the name was always Missy. You could drive by the house and often see her and Missy the dog laying out in the yard together enjoying the sun.
The grandkids were very important to Harriet also.  She enjoyed reading to them and playing games.   Often they would make chocolate chip cookies but few were baked as the spoons of raw dough were hard to pass up. They begged her to play Boogie Woogie on the piano and man could she tinkle the ivories.
She is survived by: her son, Thomas (Laurie); son-in-law, Charles Fitzpatrick; grandchildren and great-grandchildren, Apryl (JC) Conley, Kathy (Mike) Degelder, children Abby, Autumn and Brock,  LeOna (Sean) Banks, children Gavyn and June, Michael Fitzpatrick (Fiance Carina Alaniz), child Leo, and Carina’s daughters, Makena and Makyla, Melanie Lee,  Lissa Meyer and Bryce Docken; plus many dear relatives and friends.
She is preceded in death by: her Great-Aunt and Uncle; husband, Lawrence; daughter, Lori; great-grandson, Westley Banks; and many other relatives.
Funeral services will be held next summer.
Austin Funeral Home, Hallock, was in charge of the arrangements. www austinfuneralhome.com