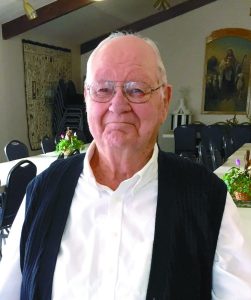 Sheldon Carlson, 93, of Lancaster, Minn., passed away at Kittson Memorial Healthcare Center in Hallock, Minn., on Friday, April 30, 2021.
Carl Sheldon Carlson was born April 15, 1928, in Humboldt, Minn., to Carl J. and Helvie (Johnson) Carlson.
As an infant, Sheldon moved with his family to Lancaster and grew up there. He was baptized and confirmed in the Lutheran faith and graduated from Lancaster High School in 1946. Sheldon attended NDSU for a year and played on the football team. He served in the Marine Corps from 1951 to 1953. On Oct. 22, 1955, he was united in marriage to Lorraine Spilde at the Eidsvold Lutheran Church in Halma. They owned and operated Carlson’s Store in Orleans, Minn., for a short time before Sheldon began his career with Standard Oil Company that lasted over 30 years.
He was a member of Sion Lutheran Church and served on the board. He was a member of the American Legion, Lion’s Club, and Lancaster Businessmen’s Association. He served on the Lancaster School Board, Kittson Memorial Hospital Board and Tri-Valley Opportunity Council.
Sheldon and Lorraine enjoyed bowling, golfing and square dancing. They loved to travel and spent 20 winters in Apache Junction, Ariz. Sheldon was a member of the Riverview Cemetery Association and served as caretaker for several years. Lorraine passed away on Feb. 7, 2020.
Sheldon is survived by his children; Jeanne (Bob) Laude, Lancaster, Jim of Silver City, N.M., Cindy (Steve) Sandahl, Warroad, Minn., Carley McDonald, Fort Myers, Fla., and Dan (Michelle), Bemidji, Minn.; grandchildren, Nathan (Heidi), Natalie (Jayson) Travis, Tyler, Nick (Komal), Toni, Alex, Christopher, Justin, Molly and Bill; 10 great-grandchildren; sister, Audella Stamnes, Hallock; and brother, Lee (Joanne) Carlson, Plymouth, Minn; sisters-in-law, Margery Stenberg and Darlene Carlson.
He was preceded in death by: three brothers, William, Duane and Gerald; and sisters, Virginia Pearson and Doreen Barry.
Funeral services are scheduled for Wednesday, May 5, 2021, at 11 a.m. in Sion Lutheran Church. Interment will be in Riverview Memorial Garden Cemetery. Military honors will be accorded by the Lancaster American Legion.
Visitation will be held at the church on Wednesday for one hour prior to the service. Kathy Levenhagen SAM, presiding. Kris and Don Thorlacius, duet; Dianne Rice, organist. Casket bearers will be Dean Carlson, Kyle Carlson, Bill Taylor, John Carlson, JayDean Stamnes, Alex Sandahl. Austin Funeral Chapel, Hallock, is in charge of arrangements.