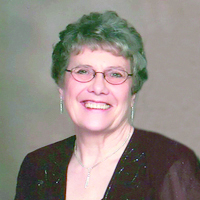 Peggy Eileen (Pudil) Carpenter, 84, passed away peacefully in her home the morning of Monday, June 21, 2021, after a two-year journey with leukemia.
She was born June 20, 1937, the daughter of Glenn and Louise (Campbell) Pudil of Pembina, N.D. She enjoyed a childhood on the farm filled with lots of love with them, her older brother, Wes, and younger sister, Faye, and considered it pure joy to have her grandparents, Otto and Zetta Pudil, live in their household as well. Her mother taught her to pray and instilled in her a love for God.
She graduated as salutatorian from Pembina High School in 1955; thereafter she attended beauty school in Minneapolis. Her first job was at Helen’s Cut and Curl in Grafton, N.D. It was in Grafton where she met her husband, John Carpenter, where he was just beginning his banking career. They happened to live in the same boarding house that was managed by an elderly woman. They were united in marriage on Dec. 22, 1957, an unseasonably warm winter day, at the Methodist Church in Pembina.
She was baptized as an adult on June 24, 1958, at Grafton Lutheran Church in Grafton.
All three of their children were born in Grafton: Denise Michelle on March 25, 1959, Scott Allen on Dec. 6, 1960, and Daniel Glenn on Nov. 12, 1962.
Peg’s formal beautician career ended in order to care for her children; however, she continued to share her expertise with family. Later in life, she spent time volunteering at the Kittson County DAC caring for her clients’ hair.
John’s banking career took them from Grafton to Luverne, Minn.; to Slayton, Minn., to Hay Springs, Neb., and ultimately Hallock, Minn., where they returned closer to their childhood roots in 1973 until their deaths.
Peg developed lifelong friendships held dear to her as the years transpired. She was a devoted housewife, loving mother and “jack of all trades” – always able to tackle anything that needed to be done. Sewing was one of her joys – dresses and doll clothes for Denise when she was a little girl and a baby quilt made with so much love for each of her grandchildren and great-grandchildren.
She enjoyed traveling – initially camping with her family and later in life with John on their many adventures in their motorhome at many different locations in the U.S. Trips abroad to Europe with friends also brought many memories. She has always been active in her church communities. During her membership at Grace Lutheran Church in Hallock, she was active in WELCA, quilting and a Bible study group that met every Wednesday morning for more than 50 years. She talked fondly of her homemakers group, which enhanced her life for many years. She and John were dedicated to their grandchildrens’ numerous activities, traveling to many concerts and sporting events.
A big smile and a hug is what you’d get from Peg when she greeted you. She was “full of the dickens” and always ready for some “shenanigans.” She loved to play cards (Rummy) and there was always a board game of Aggravation to play when visiting her home, as well as lots of good food.
She is survived by: her children, Denise (Jon) Blomquist of Hallock, Scott Carpenter of Apple Valley, Minn., and Dan (Karen) Carpenter of Warroad, Minn.; grandchildren, Gwendolyn (Kevin) Gjovik, Bethany (Shawn) Halvorson, Dana (Jordan) Lofstrom, Jesse (Danielle) Carpenter, Jack Carpenter, Amber (Matt) Kopperude, Kileigh Carpenter, Brittany Carpenter, Nikolas Carpenter and Kampton Carpenter; great-grandchildren, Mahren Gjovik, Kinzie Gjovik, Myla Halvorson, Gavin Halvorson, Henrik Halvorson, Blair Lofstrom, Reese Lofstrom, Jack Kopperude, Hudson Kopperude, Kamryn Kopperude and Asher Carpenter; sister, Faye (Dave) Von Holten of Aurora, Colo.; sisters-in-law, Harriet (Lloyd) Rygg and Ann (Tom) Walski; and many nieces and nephews.
She was preceded in death by: her husband, John, of 61 years; brother, Wesley Pudil; sisters and brothers-in-law, Shirley Carpenter, Keith Allen Carpenter, Ardyce (Chuck) Wall, Phyllis (Bob) Snustad, Bob (Melanie) Carpenter; son-in-law Mark Blomquist; parents Glenn and Louise (Campbell) Pudil; grandparents Otto and Zetta (Vargason) Pudil and Frank and Daisy Campbell.
Funeral services were Saturday, June 26, 2021, at 2 p.m. in Grace Lutheran, Hallock. Interment was in the Bathgate Cemetery, Bathgate, N.D. Visitation was held at the church for one hour prior to the service.
Austin Funeral Chapel, Hallock, in charge of arrangements. To plant memorial trees in memory of Peggy, visit www.austinfuneralchapel.com.