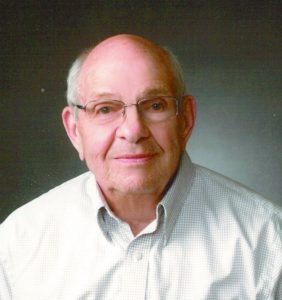 John Herbert Jirschele, 85, of Wisconsin Rapids, Wis., died Thursday, Sept. 30, 2021, at The Waterford Assisted Living in Wisconsin Rapids.
John Herbert Jirschele was born Feb. 4, 1936, in Marshfield, Wis., to Esther M. (Cournoyer) and Joseph E. Jirschele. He was the youngest of 13 children. He was baptized on Feb. 23, 1936, at St. John the Baptist Catholic Church in Marshfield. His cousins, Laurett and Herb Seitz, were his godparents. As a young boy, John moved with his family to Tomahawk, Wis., where he attended St. Mary’s grade school and graduated from Tomahawk High School in 1954.
After graduation, he moved to Milwaukee where he worked for Owens-Illinois manufacturing corrugated boxes. John was drafted into the U.S. Army during peacetime in 1959 and completed basic training at Fort Riley, Kan. He served the remainder of his enlistment as a communications chief at Schofield Barracks in Hawaii.
Upon his discharge from the Army in 1961, John returned to Marshfield and worked as a laborer for Felker Brothers. He then went to work for Packaging Corporation of America in Colby. It was there that he met Dottie Schopper, whom he married in Wausau on Dec. 5, 1964. John and Dottie moved to Lancaster, Pa., in 1965, where he continued to work for PCA. They returned to Wisconsin in 1968 to live in Friendship and John went to work for Lewis Container in Adams.
In 1979, John and his family moved to Wisconsin Rapids where he worked for Consolidated Papers as a wet machine operator at the kraft mill. He worked for Consolidated for 23 years, retiring in 1996.
John and Dottie enjoyed traveling and partaking in many different experiences. Throughout the 1990s, they biked extensively on Wisconsin bike trails and many in Minnesota. They went dog-sledding in northern Minnesota, rode to the bottom of the Grand Canyon and back out on mules, and rode 100 miles on a wagon train in Colorado. They took trips to Ireland, Austria and New York.
John helped Dottie distribute home delivered meals in the community for several years. They worked together at the neighborhood table and at the food pantry several times a year. Dottie died on March 19, 2018.
John was a life member of the Knights of Columbus and belonged to the Father John Eisen Council #1799 in Marshfield.
John was an active member of Saints Peter and Paul Catholic Church. He counted money for the church for many years and always participated in the semi-annual church cleaning days. He was on the church funeral committee, washing dishes for the many funerals conducted at the church. John was an adorer at the Marian Center Eucharistic adoration chapel from 2006 until 2017, when his health no longer permitted him to continue.
An avid reader, John had an extensive collection of books and was a WWII history buff.
Before going to live at the Waterford, John had coffee every morning at Subway with a group of individuals he thought were his friends.
John is survived by: his sons, Pat Jirschele of Wisconsin Rapids, Tom Jirschele of Owen, Wis.; daughters, Dawn (Gary) Holm of Hallock, Minn., and Diane Jirschele of Rhinelander, Wis.; seven grandchildren: Therese Holm of Reedsport, Ore., Katherine (Luke) Harnisch of Burke, Va., Maria Holm of Las Vegas, Nev., Christopher Holm of Hallock, Andrew Holm of Camp Lejuene, N.C., Genevieve Holm of Hallock, and Sedona Arendt of Marshfield; his sister, Esther Reinhart of Marshfield.
John was preceded in death by: his parents; his wife; his brothers, Denis, Glenn, Robert, Dale, Thomas, William, Neil and Albert; and his sisters, Lucille Schiferl, Utha Kille and Joan Hanson.
The family would like to thank the staff at the Waterford for the kindness and care that they showed to John.
A Mass of Christian Burial was celebrated at 11 a.m. Tuesday, Oct. 5, 2021, at Saints Peter & Paul Catholic Church in Wisconsin Rapids. Father Robert Schaller officiated; military rites were provided by VFW Post #2534 of Wisconsin Rapids. Interment will take place at a later date at Good Shepherd Mausoleum at Calvary Cemetery. Visitation was held at Ritchay Funeral Home on Monday from 4-7 p.m. A Parish Rosary was held 6:30 p.m. on Monday at Ritchay Funeral Home.