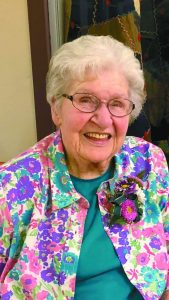 Marjorie Ann Johnson, 93, passed away Oct. 31, 2021, at the Kittson Memorial Nursing Home, Hallock, Minn.
Marjorie was born April 3, 1928, to Clarence and Ruth (Hendrickson) Haynes. She grew up in rural Hallock, the oldest of five children. She attended the Jerome Country School up to eighth grade and graduated in 1946 from Hallock High School. Her first job was at Glidden Dairy. She then worked at the Gambles Hardware Store and the Clay Drug Store.
On Sept. 8, 1951, she married Louis Johnson, a veteran of WWII. They farmed by Hallock, raising crops and livestock. Besides helping with the farming she sewed, and had vegetable and flowers gardens. She was a wonderful cook. They retired in 1988 and Gary and his sons continue to farm. They then spent a lot of time feeding and watching the birds.
She belonged to Grace Lutheran Church and the past Two River Homemakers and Sewing Club. She was involved in organizing the Two River 4-H Club and was one of the first leaders.
Louis passed away in 2006 and she continued to live on the farm until 2012 when she entered the Kittson Memorial Nursing Home.
Survivors include: a son, Gary (Renee) Johnson, and daughters, Colleen (Billy) McGovern, Hallock, and Doreen (Bob) Roy, Burlington, Iowa; Grandchildren, Rebecca, Paul, Brent, Tiffany, Christopher, Elizabeth, Jordan, Adam, Joshua and Jacob; and 15 great-grandchildren; sister, Elaine Knutson, Lancaster; sister-in-law, Ramona Johnson, Hallock.
She was preceded in death by: her husband, Louis, in 2006; a grandson, Jesse; and an infant granddaughter; brothers, Rodney Haynes, Myron Haynes, Melvin Haynes; sisters-in-law, Phyllis Haynes, Beverly Haynes, Elsie Bergh, Jeanette Johnson, Lavona Lerdahl; brothers-in-law, Dennis Knutson, Elmore Bergh, Warren Johnson, Lloyd Johnson, Al Lerdahl.
Funeral services were Friday, Nov. 5, 2021, at 11 a.m. in Grace Lutheran Church, Hallock. Interment will be in Greenwood Cemetery, Hallock. Visitation will be held at the church for one hour prior to the service. Rev. Megan Graves, presiding; special music provided by Renee Wahl. Casket bearers will be Marjorie’s grandchildren.
Austin Funeral Chapel, Hallock, was in charge of the arrangements. www. austinfuneralchapel.com.