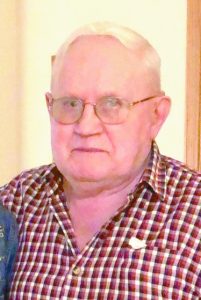 John Braun, 85, of Lake Bronson, Minn., passed away at the Karlstad Senior Living Healthcare Center on Tuesday, Feb. 1, 2022.
Johann Braun was born Aug. 11, 1936, in Rosengart, Manitoba, Canada, to Johann and Sara Braun. He grew up near Rosengart and attended school there. On Sept. 10, 1960, he was united in marriage to Helena Krahn at Winkler, Manitoba.
John farmed near Graysville, Manitoba, in his early 20s. In 1970, he and Helen moved the family to Kennedy, Minn., where John was employed at Northwest Sunflower. They later moved to a farmyard in rural Lake Bronson. John loved farming and also enjoyed running the seed plant, both of which he did for most of his life. After he retired from Northwest Sunflower, he worked part-time for Ron Petersen of rural Lake Bronson. John also loved working with wood and built many beautiful pieces of furniture over the years.
He was a dedicated father and grandfather, raising his children in the Christian faith. John was an active member of the Evangelical Mission Covenant Church in Kennedy. He and Helen moved to the Meadows Assisted Living facility in Karlstad in 2015. From there, they eventually came to reside in the nursing home.
Family members include: his children, Brad (Melissa) Braun, Lake Bronson, Angela (Dean) Stromgren, Lake Bronson, Peggy (Steven) Porter, Lake Bronson, and Polly (Peter) Johnson, Hallock; 19 grandchildren; 11 great-grandchildren; siblings, Sara (Henry) Nickel, Jacob (Susan) Braun, Nettie (George) Heide, Henry (Marlene) Braun and Isaac (Sheila) Braun.
He was preceded in death by: his wife of 61 years, Helen Braun; a son-in-law, Byron Johnson; daughter-in-law, Kristi Braun; his parents; brothers, Jacob, who died at birth, Ernst and Peter; sisters, Helena, Anna and twins Maria and Elisabeth, who both died at birth.
Funeral services were Saturday, Feb. 5, 2022, at 11:00 a.m. at the Evangelical Mission Covenant Church at Kennedy. John will be buried next to his wife in Jupiter Cemetery, rural Kennedy, in the spring. Visitation was held at the church on Saturday for one hour prior to the service. Rev. Galen Nordin, presiding; Shannon Christenson, pianist. Casket bearers were John’s grandsons.
Austin Funeral Chapel, Hallock, was in charge of arrangements. www.austinfuneralchapel.com.