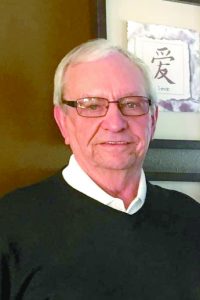 James Oliver Englund, Karlstad, Minn., passed away on Wednesday, Feb. 9, 2022, due to complications following gallbladder surgery.
James was born in Greenbush, Minn., on Oct. 14, 1938, the son of Nimrod and Nora Englund. He grew up on a farm east of Karlstad and went to school in Karlstad. He really enjoyed farm work and later went to work for their neighbor, Winfred Jacobson. He then went work at the fertilizer plant in Karlstad before moving to the Twin Cities to work for Federal Cartridge.
While in the Twin Cities, he met Constance Farbo and they were married on Oct. 12, 1968.
In July 1969, their daughter, Christi, was born. After their daughter was born they moved back to Karlstad, where he started working for Solar Gas as a propane delivery driver. In August 1970, their son Jamison, was born.
James worked for Solar Gas, which later became Cenex, for several years until he, along with partners Kent Hanson and Darryl Johnson, started Five Star Propane. They eventually sold their business to Cenex of Middle River, Minn., where he worked until he retired. After he retired, he kept himself busy by delivering Meals on Wheels, even earning a volunteer award. He also helped Justin Dagen with potato harvest. More recently he was delivering medical labs and supplies between the Karlstad and Hallock clinics.
He lost his wife of nearly 53 years in August of 2021.
Family was very important to him, always supporting his children and grandchildren in all of their activities.
One of his favorite hobbies was golfing, he played in the Karlstad men’s league for many years as well as the senior tour. He really looked forward to those Monday tournaments. Most summer days he could be found out on the golf course.
He was an avid Minnesota sports fan, especially the Vikings, Twins and Gophers.
He is survived by his daughter, Christi; son, Jamison (Kim); grandchildren, Cody, Ty and Kylie Englund and Dalton Tweet.
He was preceded in death by his parents; wife, Constance; son-in-law, Dennis Tweet; brothers, Gene, Louis, Charles, Rodney, Larry, Gary, Richard and Jackie; sister, Charlotte; mother and father-in-law, David and Vivian Farbo; and brother-in-law, Paul Farbo.
Funeral services are scheduled for Saturday, Feb. 19, 2022, at 11 a.m. in First Lutheran Church, Karlstad. Visitation will be held at the church for one hour prior to the service.
Austin Funeral Chapel, Hallock, is in charge of the arrangements. www.austinfuneralchapel.com.