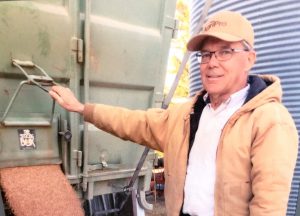 Ronald Lee Petersen, of Lake Bronson, Minn., passed away at Altru Hospital on Feb. 10, 2022.
Ron was born to Willard and Nomie Petersen on March 7, 1951, in Drayton, N.D. He grew up on a farm with his parents and older sister, Becky. Farming was in Ron’s blood from a young age. As a member of 4-H, he grew a garden and sold potatoes to a local grocery store. He also purchased seven cows and participated in the family farming life.
Ron graduated from high school in Kennedy, Minn., in 1969. That fall he attended Covenant Bible College in Prince Albert, Saskatchewan. He then attended NDSU from 1970-1973 and completed a degree in Mechanized Engineering within the Ag Engineering Department. Following graduation he returned home to farm with his dad.
In 1977, Ron met Debbie Hillestad, who had moved to Kennedy to teach at the school. They married July 1, 1978. In 1984, they moved onto the family farm. Ron and Debbie welcomed two daughters into their family, Rachel and then her younger sister Amy.
Ron was a hard worker. Along with farming, he designed and started a seed plant on his farm in the late 1980s. He expanded his business when he purchased a seed plant in Kennedy.
Ron enjoyed many activities and had a lifelong interest in flying. He learned how to fly powered parachutes and had fun taking family and friends on rides during summer months.
Through his life Ron served on several boards, including the Heritage School Board. Most recently he was co-treasurer at Kennedy Covenant Church and also served on the Jupiter Township Board.
Ron had a strong faith in God, loved his family deeply, was a beloved husband, father and grandfather, and cared deeply about his friends and community. He showed creativity in loving his family, picking flowers from the pasture for his wife, joining any and every imaginative game with his girls, and getting down on his hands and knees to join his grandchildren in play.
Family members include his wife, Debbie; daughters, Rachel (James) Hogan and Amy (Gustavo) Sagrado; grandchildren, Svea, Finn and Jasper; sister, Becky (Steve) Rude, nephew, Jon (Lea) Rude; great nieces, Jadyn and Mackenzie; sisters-in-law, Lynne (Jim) Kennedy, Gail Hillestad, Carol Schmitt; brother-in-law, Jon Hillestad; nieces, Lisa (Jon) Gurule, Josie (Brian) Just; nephews, Jason (Elaine) Schmitt, Scott (Tiffany) Kennedy and families.
He was preceded in death by his parents, Nomie and Willard Petersen.
Funeral services are scheduled for Wednesday, Feb. 16, 2022, at 11 a.m. in the Evangelical Mission Covenant Church in Kennedy. Rev. Gary Dorn, presiding, Shannon Christenson pianist; Lyndon Johnson and Ron Fossell, duet. Honorary pall bearers will be Ron’s many friends. Visitation will be held at the church for one hour prior to the service. Interment will be in Jupiter Cemetery, rural Kennedy.
Austin Funeral Chapel, Hallock, is in the charge of arrangements. www.austinfuneralchapel.com.