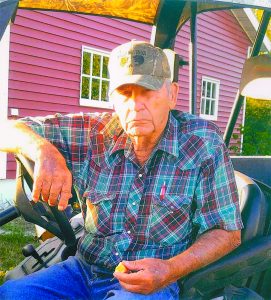 Clifford H. Green, 95, of Halma, Minn., passed away peacefully at his home on Saturday, Feb. 19, 2022.
Clifford Green was born on Nov. 14, 1926, to Randolph and Ida (Belle) Green in Canada. At the age of 4, his family moved to McKenize County, N.D. Cliff served in Japan and the states for the U.S. Army at the end of World War II from 1945 to 1947.
Cliff was united in marriage to Ruth Fitzgerald in Cavalier, N.D. Cliff and Ruth embarked on many travels with his work in the oil field including working in Alaska for Kodiak Oilfield haulers advancing to truck superintendent.
In 1972, Cliff and Ruth purchased their farm in Halma. They ran a dairy farm until Cliff retired from the oil fields and then transitioned to raising beef cattle.
Cliff enjoyed spending time with his grandchildren. To them, it was like winning the lottery to spend a weekend at the farm with Grandma and Grandpa. Cliff enjoyed his daily trips to KK and conversations with friends over coffee. Other than family, farming was his passion and dream come true.
Cliff was a member of the American Legion for 50 years, a proud member of the NRA, a member of Kittson County Ag committee and a member of Eidsvold Lutheran Church in Halma.
Family members include; sister, Ruby Sweley, of Sidney, Mont.; brother, Randolph JR Green, of Sidney; his children, Bruce (Florene) Green of Billings, Mont., Robert (Debra) Green of Pierre S.D., Patricia Sotelo of Fairview, Mont., Terri Syverson of Karlstad, Minn., Judy (Larry) Johnson of Grand Forks, N.D., Thomas Green of Halma, Melissa Gunnarson of Hallock, Minn.; grandchildren, Mike (Lori) Lindholm of Newfolden, Minn., Derick (Shannon) Converse of Newfolden, Jared Johnson of Grand Forks, Tony (Kristi) Converse of Greenbush, Minn., Brandon (Ashley) Johnson of Grand Forks, Ethan (Julie) Gunnarson of Kennedy, Minn., Sarah Johnson of Grand Forks, Jacob Johnson of Grand Forks, and Ashley Gunnarson of Hallock; many great-grandchildren and great-great-grandchildren.
Cliff is preceded in death by: his parents; his wife, Ruth; brothers, Albert, Wallace, Alvin; sisters, Beulah and Noranda.
Funeral services were Saturday, Feb. 26, 2022, at 11 a.m. in First Lutheran Church, Karlstad. Visitation was held for one hour prior to the service in the church. Interment will be in Eidsvold Cemetery, Halma. Rev. Caitlin Jensen, presiding; Kathy Englund, organist and Hannah Lindholm, soloist. Casket bearers will be grandsons, Michael Lindholm, Derick Converse, Jared Johnson, Tony Converse, Brandon Johnson and Ethan Gunnarson. Honorary casket bearers will be friends and neighbors.
Austin Funeral Chapel, Hallock, was in charge of the arrangements. www. austinfuneralchapel.com.