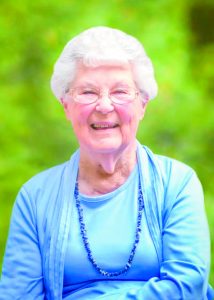 Audella Mabel Carlson Stamnes, 96, of Hallock, Minn., died peacefully in Kittson Memorial Healthcare Center early Monday morning, Jan. 24, 2022.
She will be remembered by many for her friendly, positive, supportive and fun-loving nature. From teaching young men how to dance, to helping girls with their 4-H sewing projects, to providing advice to grandchildren applying for a job, Audella always enthusiastically encouraged their efforts.
Audella was born in Lancaster, the first child of Carl and Helvie Carlson, on April 9, 1925. For most of her childhood, she lived on the family farm outside of Lancaster, attended church as Sion Lutheran Church and graduated in 1943 from Lancaster High School. Following graduation, she enrolled in a business course at Aaker Business College in Grand Forks and then took a job at Boeing Aircraft Company in Seattle, Wash., as a bookkeeper.
On July 7, 1946, she married Dale Stamnes of Halma. After a brief period of living in Kennedy, they settled in Halma. Audella went to work part-time as a bookkeeper for the Halma Creamery and for Grant Bothum’s farm in addition to raising a family of three children. She was very active in Eidsvold Lutheran Church, the Agricultural Extension Service Homemakers and 4-H programs, American Cancer Society, Karlstad Parent Teacher Association and the Kittson County Day Activity Center at Lake Bronson. In 1966, the family moved to Lake Bronson. After Dale passed away in 2003, Audella moved to Karlstad where she resided until 2016 and then moved into Kittson Memorial Healthcare Center.
Audella leaves behind her immediate family: Connie (Jack) Uetrecht of Toronto, Ont., Canada, Jaydean (Noelle Swanson) Stamnes of Lake Bronson and De Ette (Richard) Anderson of Owatonna, Minn., her brother Leland (Joanne) Carlson of Minneapolis, and sister-in-law, Darlene Carlson of Hallock; her grandchildren (partner) and [great-grandchildren] include: Andrea Uetrecht, Annette (Patrick Ho) Bain [Nicolas and Madeleine], Meridee (Josh) Becker [Miranda and Ty], Kristen (Levi) LaVallee [Liv and Lavin], Jason (Ashley) Anderson [Molly, Maren and Myla] and Jackie (Joe) Havel [Marek and Marlee]; her extended family includes: Berdine Swanson and Amanda (Jeff) Rickenberg [Adelyn, Eliana and Olivia].
She is preceded in death by: her parents; husband, Dale; and siblings, Virginia (Dennis Nordling, Orville) Pearson, Sheldon (Lorraine) Carlson, Bill (Mary) Carlson, Doreen (David) Barry, Duane Carlson, Jerry Carlson.
A Celebration of Life Memorial Service is scheduled for Saturday, April 16, 2022, at 10: a.m. at the Austin Funeral Home in Hallock. A visitation will be held from 9:30 a.m. until the time of the service. Interment will be in the Eidsvold Cemetery in Halma following the memorial service. In memory of Audella, donations can be made to the American Cancer Society, Kittson County Historical Society or the Kittson County Hospice.
Austin Funeral Chapel, Hallock, was in charge of the arrangements. www. austinfuneralchapel.com.