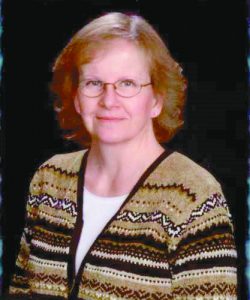 Marceil “Marcy” (Peterson) Laursen, 67, passed away unexpectedly of natural causes on Dec 29, 2021.
She was born on Oct. 22, 1954, to Raymond and Lyla Peterson of Lancaster, Minn. Marcy was baptized at Sion Lutheran Church on Dec. 8, 1954. She went to grade school in Lancaster until she and her parents moved to Babbitt, Minn., in 1965.
On the farm in Lancaster, Marcy enjoyed helping her dad with barn chores and baking with her mom. Of all the animals they had, her most loyal companion was her dog. He even knew the correct time to meet her at the end of their long driveway when the bus dropped her off after school. They were always side by side. Her love of dogs stayed with her throughout her life.
Marcy graduated from JFK High School in Babbitt in 1972 and continued her education at the Minnesota School of Business in Minneapolis.
Marcy was married and eventually divorced, but always remained a loyal mother who dedicated her life to her son and two daughters. From supporting them through activities and sports, getting their first jobs, pursuing their passions and many hobbies, Marcy was always there to encourage them and help where needed. This desire to be present continued throughout their adult lives as she loved nothing more than being a devoted Grandma to her four grandchildren.
Marcy was a dedicated employee of JC Penney and was proud to be the longest running employee of the Eden Prairie location, opening the store on day one in 2007, and continuing her employment there up until her death.
Two weeks prior to her death, she had to make the extremely tough decision to put down her 15-year-old Sheltie. As her devotion to family had passed down to her children, all three kids were there for her and were present as Bella passed over the Rainbow Bridge. We know Bella was waiting to run back to her as Marcy followed her to heaven just two weeks later.
Marcy is survived by her mother, Lyla Peterson; her son, Tony (Susy); daughters Kayla (Vincent), and Stephanie (Chance); four grandchildren; several grandkitties and granddogs, uncle Wilbur Madsen, aunt Delphine Uppman, and several cousins.
She was proceeded in death by her father Raymond Peterson, grandparents, uncles, aunts, and cousins.
Visitation will be held in the Twin Cities at Faith Lutheran Church in Shakopee on Sunday May 1, 2022 from 3-5 p.m. Formal funeral will be held at Sion Lutheran Church in Lancaster on Saturday, May 28 at 2 p.m. Visitation held one hour prior to the service with burial to follow.