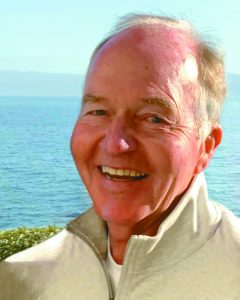 Gary Earl Gorvin, 70, of Kennedy, Minn., passed away at his home early Wednesday morning July 13, 2022, after a year-long battle with sarcomatoid mesothelioma.
Gary was born in Drayton, N.D., Dec. 29, 1951, to Debra (Olson) and Earl “Pete” Gorvin. He grew up in Donaldson, Minn., where he spent his childhood helping his dad farm wheat, barley, soybeans, sunflowers and eventually sheep. Gary took over the farm from his dad and got to do his “dream job” for 25 years before leaving farming in 1997. He then worked for Minn-Dak Growers in Donaldson before transitioning to CHS in Stephen, Minn., where his favorite job was getting to take his truck “Jasper” to haul all over Minnesota, North Dakota and Canada.
Gary married Cheryl “Cheri” (Jopp) on March 8, 1985, at St. Olaf Lutheran Church in Donaldson. They had three daughters, Melissa (Missy), Sarah and Megan. Gary said he found his calling in life in being a dad and he truly was the best at it. He was always patient and kind, and found a way of making even the most mundane or routine tasks seem magical or special to his daughters.
Gary loved to travel and went on many incredible trips throughout the years. His favorite places included London, Normandy, Key West and San Diego. For many summers, Gary and Cheri took road trips to Utah and Arizona. Highlights of these trips included taking a Jeep down Schaeffer Trail, Utah, seeing Monument Valley in Moab, and spending time in Ouray, Colo.
Gary is survived by: his wife, Cheri; daughters, Missy (Jered) Kemnitz, Cavalier, N.D., Sarah (Shawn) Gorvin-Baxter, Tempe, Ariz., and Megan (Ryan) Gorvin Short, Mesa, Ariz.; grandchildren Aubree and Kaleb Kemnitz; sister, Cindy (Les) Davidson, Phoenix, Ariz.; his brother by choice, Jon (Christine) Pietruszewski, Kennedy; and many sisters-in-law, brothers-in-law, nieces and nephews.
He was preceded in death by his parents and his very best kitty friend, Buddy.
In lieu of flowers, please consider making a donation to Roger Maris Cancer Center in Fargo or Circle of Friends Animal Shelter in Grand Forks.
Funeral services are scheduled for Thursday, July 21, 2022, at 2 p.m. in Austin Funeral Chapel, Hallock. Visitation will be held for one hour prior to the service.
Austin Funeral Chapel, Hallock, was in charge of the arrangements. www. austinfuneralchapel.com.