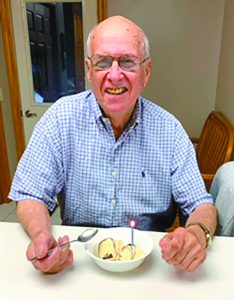 Joel Dunn, 83, of Hallock, Minn., died at Altru Hospital in Grand Forks on Thursday, Sept. 1, 2022.
Joel Edward Dunn was born in Grand Forks on Oct. 17, 1938 to Ray and Katie (Salmonson) Dunn. Joel grew up in Hallock graduating from high school in 1956.
After completing his education he worked in Kittson County with the survey crew and later at Magnetic Controls in the Twin Cities before entering military service. Joel served with the U.S. Army for two years from 1961-1963. His service there was in the US Army Engineer District, Engineering Division. Upon his return to Minnesota, he began working for Midwest States as a surveyor in their corps of engineers department.
In 1968 he was united in marriage to Judith “Judy” Simonson at McIntosh, Minn. During the couples’ marriage from 1968-1987, they returned to the Dunn family farm where they farmed for many years and welcomed two daughters, Heather and Holly.
In 1989, Joel married Lorraine (Nelson) Pettygrove and they continued to farm until retirement, but his love and desire to farm never faded.
Family and friends will forever remember him for his gentle spirit, his hard work ethic, love of family, and steadfast faith.
Family members include his daughters, Heather (Todd Truedson) Mundy, Kasson, Minn., and Holly (Tony Willenbring), St. Louis Park, Minn.; grandchildren, Katelyn Wright, Breanna Mundy and Caleb Wright; a sister, Susie (Dean) Hallock; brothers, Rodney (Betty), Orr, Minn., Duane, Northfield, Minn. and Dale (Cheryl), LaPorte, Minn. He was preceded in death by his parents; wife, Lorraine; a sister, Katherine Keske; and a son-in-law, Tyler Mundy in 2017.
Funeral services are scheduled for Wednesday, Sept. 7, 2022 at 11 a.m. in Lancaster Covenant Church.
Interment will be in Riverview Memorial Garden Cemetery. Visitation will be held at the church for one hour prior to the service.
Austin Funeral Chapel, Hallock, is in charge of the arrangements. www. austinfuneralchapel.com.