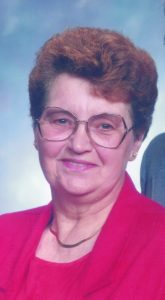 Ruby Peterson, 86, of Lancaster, Minn., passed away peacefully at Kittson Memorial Hospital in Hallock on Thursday, Sept. 1, 2022.
Ruby Pearl Kleven was born Feb. 24, 1936 in Karlstad, Minn., to Carl and Helga (Hanson) Kleven. She grew up in Karlstad and attended school there. After completing her education she worked as a nanny and helped with harvest on area farms.
On Oct. 10, 1953, she was united in marriage to Roger Peterson at Grace Lutheran Church in Hallock. They settled on the Peterson family farm and raised their family there. Ruby worked as a seamstress for Arctic Cat in Karlstad and sewed many types of outer garments including Arctic racing suits.
In 1970 after the Karlstad clothing branch of Arctic Cat closed, Ruby began working at MCI in Pembina, N.D., retiring in 1996. Roger passed away on Oct. 14, 2014.
Ruby was a longtime member of Sion Lutheran Church. Ruby and Roger loved camping and fishing. They made several trips to Branson, Mo., and enjoyed traveling. Ruby was an excellent cook and gardener.
Family members include her children, Roxanne Berberich, Karlstad; Renee (Gary) Johnson, Hallock; Royce (Lorelei) Peterson, Lancaster and Rodney (Mary Hedlund) Peterson, Thief River Falls, Minn.; 13 grandchildren; and 31 great-grandchildren; a brother-in-law, George Lindstrom; sister-in-law, Diane Kleven; brother-in-law and sister-in-law, Donald and Betty Peterson.
She was preceded in death by her parents; husband, Roger; three brothers, Marvin, Bertil and Ronnie, two sisters, Joan and Ruth; and an infant great-granddaughter.
Funeral services are scheduled for Thursday, Sept. 8, 2022 at 11 a.m. in Sion Lutheran Church, Lancaster. Interment will be in Riverview Memorial Garden Cemetery, Lancaster. Visitation will be held for one hour prior to the service in the church.
Austin Funeral Chapel, Hallock, is in charge of the arrangements. www. austinfuneralchapel.com.