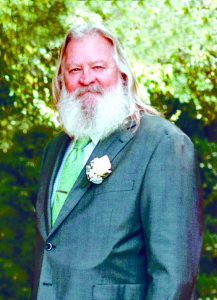 Theron Reed was born in Karlstad, Minn., to Willard and Bonnie (Dexter) Pearson on Oct. 4, 1960. He grew up in Hallock and graduated from Hallock High School in 1979. Theron worked briefly as a sanitation worker in Hallock and later worked at the Hallock Grain Elevator for many years. He was also a member of the Hallock Volunteer Fire Department.

On July 10, 1991, he was united in marriage to Sherri Priebe in Hallock. The couple lived in Hallock until 2001 when they and their two children moved to Warroad. Theron worked at the elevator in Roseau, as well as the Warroad School.

In 2014, he moved to Roseau and began working as a custodian at Roseau Public School where he was currently employed.

Theron took classes in taxidermy and was proud of the bear he had done for Lake Bronson State Park. He enjoyed all things outdoors: hunting, fishing, picking blueberries, grilling and smoking meats, and camping.

He loved his garden and would spend many hours feeding and watching his birds. Theron was always one of the hardest working people in the room, always willing to help others, and did it with a smile on that big bearded face.

Theron was preceded in death by his parents, Willard and Bonnie.

Funeral services were held Friday, Nov. 25, 2022 at 11 a.m. in Grace Lutheran Church, Hallock. Visitation was held at the church for one hour prior to the service. Rev. Megan Graves, presiding; Special music provided by Renee Wahl and Mitchell Ryden. Honorary pallbearers will be Craig Pearson, Kirk Pearson, Todd Pearson, Bubba (Mark) Craigmile, and the faculty and staff at Roseau Public School.

Austin Funeral Chapel, Hallock, was in charge of arrangements. www.austinfuneralchapel.com.